Malta is a small island with great Mediterranean vibes. Nightlife and Clubbing are now a main attraction to the Maltese Isalnds.

Different events and parties go on all year round in both Malta and Gozo. There is plenty of diversity in Maltese nightlife; from cultural to alternative events and obviously the usual night clubbing.

Valletta – The Government of Malta has strongly encouraged the rehabilitation of the capital city – Valletta over the past decade or so and this has now become a popular evening stop for both locals and foreigners. Therefore, if you’re interested in a tranquil and pleasant night accompanied by beautiful historic buildings, local trattorias, wine bars, and music in the joyful little streets, Valletta may just be perfect for you. Malta is culturally wealthy not only on the historic side of things but also in entertainment, the 18th century Manoel Theatre in Valletta is a great opportunity to experience culture and entertainment merged into one and see different performances such as; operas, orchestras and even musicals.

Mdina – Many other towns can offer a lovely evening, however the old capital- Mdina is a msut during your holiday. The combination of the beautiful bastions, the authenticity of its narrow streets along with beautiful views all have the ability to send you back in time. Here you may find various traditional local restaurants and wine bars with some venues having local folklore dancers as a highlight of the evening.

Rabat – If you are staying in Mdina whilst on holiday in Malta, you should find the time to visit Gianpula Village in Rabat (Mdina’s neighbouring Village), this is one of Malta’s biggest party entertainment destinations. Mostly active during summer season, Gianpula organizes diverse events sometimes even during the same night as it is situated on large grounds and is equipped with different areas. They even organize weekend festivals, such as Glitch with well-known House-Techno Dj’s.

The Three-Cities (Vittoriosa, Senglea and Cospicua) – also provide a beautiful evening atmosphere. The Vittoriosa Yacht Marina has a good choice of high quality restaurants all enjoying beautiful and tranquil view over the Marina towards Senglea. Expect to see some super yachts in this Marina which will surely get your camera clicking.

Paceville & St Julians – The Maltese Islands have become a focal point for the clubbing scene. One of the most popular spots is Paceville, which is in the locality of Saint Julians. Starting with Sky Club which is one of the biggest indoor clubs on the Island, used for mega events and concerts throughout the year. There are also other smaller clubs each with a different genre of Muic, for example ‘Havana’, known for soul, r&b and hip hop. Other popular bars are in and around Paceville are ‘Footlose Bar’; ‘Native Bar and Diner’ which is open throughout the day turning into a salsa club during the night, Hugo’s Bar which sits just opposite the sandy beach of St Georges Bay is also another popular evening stop for the young at heart.

St Pauls’ Bay – Café Del Mar located in St Paul’s Bay is another popular venue, well known for its beautiful sunsets overlooking an infinity pool which seems to lean over the sea. Depending on the night, you may opt to have dinner or enjoy a party event here.

Bugibba, Qawra and Mellieha – are also popular for their night life, with numerous options ranging from beach bars to karoake bars, from traditional local bars to Irish Bars, from burger shops to fine restaurants, rest assured that there is plenty of choice.

Malta has a busy calendar of concerts and festivals especially in the summer months such as the International Jazz Festival, the Malta Arts Festival, the Earth Garden Festival and the Isle of MTV Malta where major artists from all over the world have performed and continue to do so, attracting massive crowds of both tourists and locals. 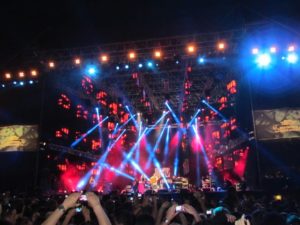